When people think of feeling they often think solely of emotions. Although emotion science still lacks a universally agreed definition of emotion, there is broader agreement over the kinds of feeling that emotions involve. Typically, emotion scientists study feelings such as happiness, anger, surprise, sadness, disgust and fear.

Whilst emotions such as these are certainly important for teaching and learning, the influences of feeling are far wider. Alongside emotions, feelings relevant to learning include those of confidence, certainty, doubt, hesitancy, excitement, flow, boredom and impatience. These feelings – which do not typically appear in taxonomies of emotion – will be familiar to anyone who has ever learned or has ever taught.

Yet the relevance of feeling for teaching and learning goes wider still. For the processes of reasoning itself – the very processes that teaching aims to develop, train and refine – are themselves most fundamentally directed by, and dependent upon, feeling. Strange as it may at first seem, effective reasoning is continuously dependent upon certain kinds of feeling. In an age where the information processing metaphor of thinking is so taken for granted that its metaphorical status has become all-but forgotten, this can at first seem like a peculiar claim to make. But we only need return to the origins of psychology – one of the foundational disciplines of education – to find this acknowledged quite explicitly.

For example, in his ‘Principles of Psychology’ William James talks about feelings of ‘but’ and ‘and’. He suggests that these feelings guide and direct thinking and reasoning, and when he says this it is quite clear that he is not speaking metaphorically. When James describes a feeling of ‘but’ he is describing the felt, corporeal sense of not being able to ‘go with’ an argument or accept a claim. He is describing the feeling of getting ‘stuck’ at a certain point in an argument, the feeling of encountering an ‘obstacle’ which prevents the person from simply going along with a sequence of arguments or ideas. Likewise, when James describes a feeling of ‘and’ he describes a feeling of inevitable connection, of things being necessarily conjoined, of a seemingly obligatory movement of arguments or ideas such that if this is accepted that necessarily follows.

In the years immediately following James’ work, behaviourist psychology - which mostly denied the significances of feelings by casting them as ‘unscientific’, because not observable - obscured these insights. Then, in the 1960’s, the rise of cognitive psychology and its information processing metaphor overcame the objection that the study of unobservable processes was unscientific and so re-introduced a version of experience – but one that was largely disembodied, abraded, and lacking any necessary organic substrate. As a result, feeling was still largely excluded, and on the rare occasions when it did appear was typically subordinated to cognitive processes.

At the same time, on the margins of psychology and education some scholars continued to insist upon the fundamental importance of feeling. There is in fact a rich tradition of sophisticated and influential intellectual work by notable scholars including Alfred North Whitehead and Suzanne Langer, and - more recently – Mark Johnson and John Shotter, to which feeling is of central and continuous relevance.

In recent years, with the so-called ‘affective turn’ in psychology, the social sciences and the humanities, this tradition is at last receiving more attention (Cromby, 2015). And this is the sense in which Jennifer Hawkins’ insightful book, closely informed by her many years of teaching practice, is particularly timely. It speaks to an incipient movement in psychology and educational studies that can draw upon these and other intellectual resources, in order to once again recognise feeling as a central and fundamental process within thinking, learning and teaching.

Professor of Psychology at Loughborough University 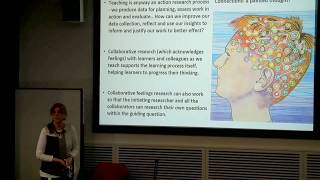 Thesis Title: A Phenomenological exploration of feelings, thinking and learning: A practitioner acti